Red Hat Certified System Enginner (RHCE) Certification will enables you to prove your ability to configure networking services & security on servers that runs Red Hat Enterprise Linux. RHCE is a mid-level certification for the Linux administrators who support Linux as a primary server platform in their organisation.

This Course will Benefit all Learners who aim at improving their Knowledge and reaching the Superior Level of Linux Administration.

The most important benefit IT specialists can receive is that this certification program is a highly preferred Linux accreditation across the world that turns into endless job offers and extremely rewarding career. This certification program not only brings you certainly also aid you to increase your ability to handle some other distribution systems Linux.

To achieve the RHCE certification, you must first become RHCSA certified. The recommended training for the RHCE certification is based on your skill level. Windows admins with minimal Linux experience should take the Red Hat System Administration I and II (RH124 and RH134) courses, along with the Red Hat System Administration III (RH254) course to prepare for the exam.

Installation And Configuration of Ansible

Use Ansible modules for system administration task that work with

Why do you want to go for RHCE ?

In general, RHCE or Red Hat Certified Engineer is known as the crown jewel of the Linux certifications.

It will prove the candidate’s eligibility via live systems in an effective manner.

On that basis, the RHCE Certification will prove the candidate’s capability to configure the security on servers and then configure the networking services which is running the red hat enterprise Linux.

Basically, RHCE Certification is considered to be the mid-level certification, which is for administrators who will support the Linux operating system as the major server platform for their performance field.

Sure it will be useful.

What is the examination format of RHCE Exam

Throughout the exam, you will be provided a list of tasks to perform related to the exam objectives. In most maximum cases, the tasks will be described in terms of a particular end state that you must complete. Your exam will be judged on whether your systems meet the criteria specified.

Internet access is not given during the exam, and you will not be permitted to bring any hard copy into the exam. This prohibition includes notes, books, or any other material.

What are the common mistakes you should avoid in RHCE exam ?

There are some important things which you keep in mind so that you can avoid some common mistakes:

2) Always start services and chkconfig before you reboot.

4) Do not be in a hurry and read every question carefully.

5) Do not over attempt or perform extra activities, stay focusses.

How do I get RHCE Certification

To earn the RHCE credential, one must also pass the Red Hat Certified System

Administrator exam. Someone can enroll in and take the RHCE exam without

certification will not be issued until both credentials are earned by a candidate.

Is RHCE a good certification?

RHCE certification is a very important examination to test knowledge, skills, and ability to require a senior-most position. With limited vacancy, postings are done so that the candidates need to go for RHCE courses online. 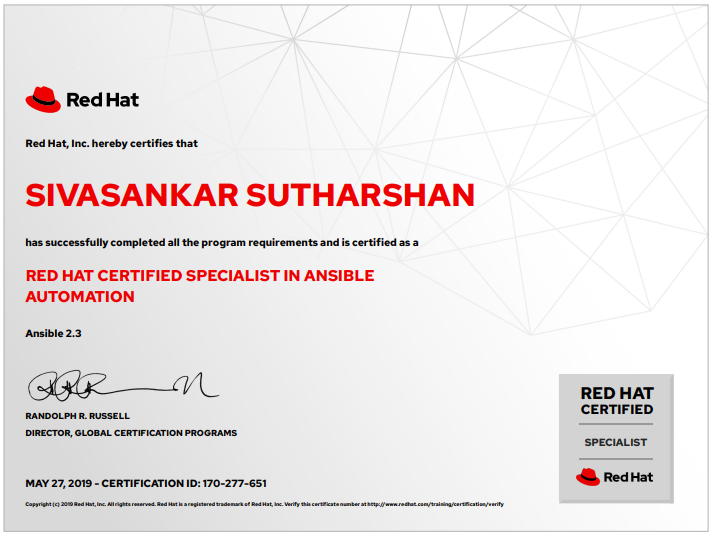 A self-paced e-learning with recorded video sessions that you can access anytime without going beyond your comfort zone.

An interactive classroom style virtual instructor led training to engage and learn more alongside your peers with a live trainer.

A Social forum where you can ask your questions, one of our expert will reply you within 24 hours on that community.

Who will be the Trainer for RHCSA live classroom training?

Trainer will be Red Hat Certified having more than 15 years of experience in training and working in the IT field.

Is the RHCE Exam Voucher fee included in the course fee?

Will my RHCE certificate expire?

The RHCE certificate will  expire after 3 years after that you will have to re-appear in the examination to renew your certification.

How does the RHCE online classroom (Instructor-Led) training work?

Our Online classroom (Instructor-Led) training for Red Hat Certified System Engineer (RHCE) Training is conducted via live streaming app like zoom, Web-ex, or blue jeans by a Red Hat certified trainer having experience of more than 15 years in IT domain & training.

What if I miss a live training session?

All of our Red Hat Training Courses are conducted via live streaming app these are the interactive sessions that enable you to even ask questions with the trainer and participate in discussions during class time. We also record each session and share it with you for future reference.

What is the salary of a Red Hat Certified Engineer?

RHCE is watchful as the highest giving certification courses in the Linux field received a salary of roughly about 90,000 per month. It is important to know that the RHCE salary in India will vary from one Red Hat Certified Engineers to one based on their job character.

what are the objectives of the new RHCE track?

Becoming a Redhat Certified Engineer will demonstrate that you are Red Hat Certified System Administrator who can automate red Hat Enterprise Linux task.

Who are ideal to do RHCE Certification?

For those RHCSA’s who want to acquire a senior-level credential and for those who are working as system administrators (but not certified).